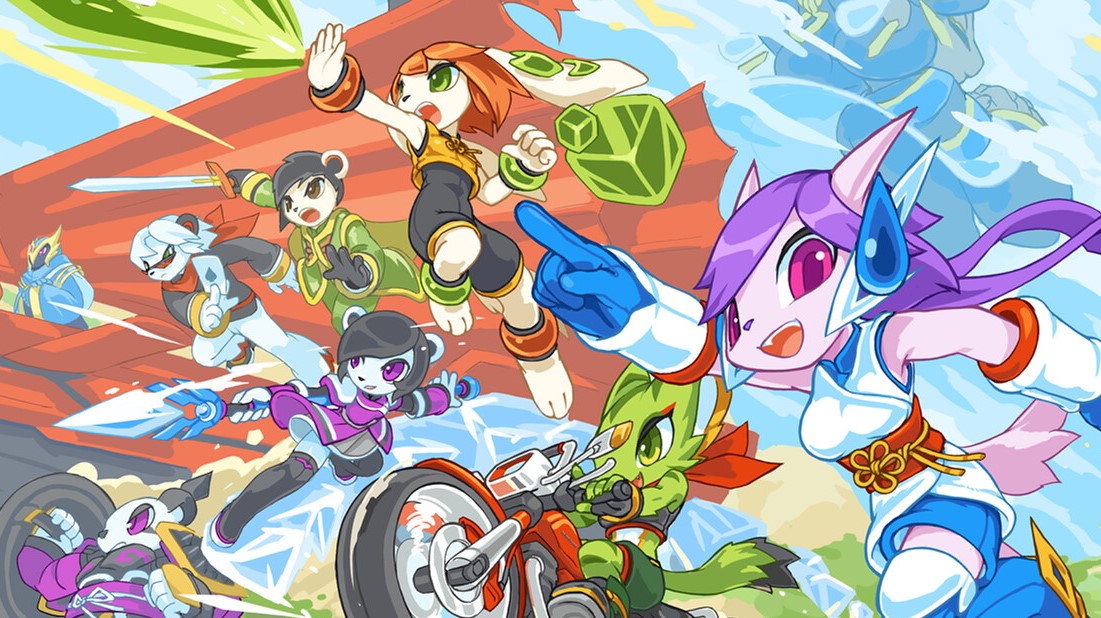 2014’s Freedom Planet changed the Sonic The Hedgehog fan scene. It was one of the first big projects to shed its borrowed Sega branding and become its own thing—not just in terms of aesthetics and setting, but mechanically, too. Channeling the spirit of Japanese studio Treasure (Gunstar Heroes, Ikaruga, etc), Freedom Planet blended Sonic’s speedy platforming with playful, expressive aerial movement and satisfying boss-bludgeoning combat. It was great fun, but the indie developers behind it had bigger plans.

After seven long years in development, the sequel is now available, and it was worth the wait.

For newcomers, I’d recommend starting with the first game. It’s still a gem, and the story won’t make much sense without it. The sequel is a loosely Sonic-inspired platformer starring a cast of cute kung-fu animals in a broadly Asian sci-fi world. While there are opportunities to go really fast, ride rails and run on walls and ceilings in classic Sonic style, the focus here is more on playful, agile navigation. Several levels are exploration- and even puzzle-focused, and even the faster stages reward climbing into weird corners with hidden areas and collectibles.

As well as the physics being more forgiving of slowpokery (you can just power your way up vertical walls from a near-stop) each of the four playable characters has additional air mobility options, from double jumps to glides and combat moves like air dashes and uppercuts that extend air time – they’re essential to reach the more unusual routes.

Combat is as fundamental as movement here. Smaller enemies can just be blitzed through, and larger ones take only one or two hits from your bigger attacks, maintaining flow. Combat slows down during the (many) boss fights, but these are almost all a joy, thanks to their clear attack patterns, eye-catching designs (often featuring dozens of moving sprites, letting bosses shake, rattle, roll and shapeshift) and sheer scale. Combat channels Treasure classics like Gunstar Heroes: fights range from one-on-one brawls with similarly scaled characters to titanic robots several screens high, putting those platforming skills to the test.

FP2 also adds an extremely powerful block button that lets you negate almost all damage if properly timed. With it, it’s possible to win every single fight without taking a hit.

If Freedom Planet felt like a Mega Drive game, Freedom Planet 2 is the snazzier Sega Saturn sequel: Sprites are bigger and more animated, and there’s plenty of rotation and zoom effects used.  While the basics of movement feel familiar, there’s more control given to all characters. Main heroine Lilac can now chain double-jumps and air-dashes to give huge mobility even without platforms, and Carol the wildcat is now untethered, able to wall-jump and place her own jump-boosters.

It’s liberating stuff, and missing a jump can easily be recovered from in style, making FP2 a very forgiving game; It wants you to have fun on your own terms. On top of difficulty settings and a range of accessibility options, there are unlockable items that can greatly reduce or increase difficulty in interesting ways. Want to race against the dev’s par times or clear stages with a single hit point? Do it. Or you can start each stage with powerups, bonus lives, or extra powers like health-leeching attacks.

While the vanilla experience is excellently tuned, you’re invited to tweak those dials if you feel the need.

It’s easy to see how this took seven years to create. Every level is visually and mechanically distinct, often with a shift in aesthetic around the mid-way point. Between levels, there’s a world map to wander with multiple towns, packed with interesting characters that have new things to say after every major plot beat. Every NPC has a distinct sprite animated as cleanly as any of the main cast, too. These are the kind of details that only come from a truly passionate development team.

You can feel it in the writing and voice work, too. Freedom Planet could get wrapped up in itself, leaving cutscenes running overlong, and some of the cast clearly had better recording equipment than others. That’s all fixed here, and they’ve roped in some familiar anime talent, including Chris Sabat (Vegeta and Piccolo from Dragon Ball Z’s dub) who delivers a great performance as burly brawler Askal—a performance aided by some cheeky Dragon Ball-esque sound effects.

Even Freedom Planet 2’s setting feels heartfelt and rich. Picking up several years after the first game, FP2 blends a mixture of anime tropes, western Saturday morning cartoon dialogue and voicework, and an interesting mix of Chinese and Philippine culture, myth and design. Despite its cartoon energy, the story tackles some heavy topics, including the long-lasting fallout of colonialism and the erasure of indigenous cultures. I know that sounds dicey for a platformer inspired by Sonic the Hedgehog but it somehow sticks the landing.

My first run through FP2 took a solid eight hours, and there are three other characters with their own gameplay mechanics, cutscenes and dialogue I still want to play with.

There’s not much to nitpick here. While FP2 nicely supports high refresh monitors (great for a fast-moving game like this), it renders at an intentionally low resolution to maintain its Saturn-esque aesthetic. While usually fine, when the camera zooms out to show larger areas or keep up with a speeding player, things get a bit rough and pixely. There’s also a couple boss fights that are a bit weaker than the rest, but two or three mediocre fights out of around forty is still a fantastic batting average.

Freedom Planet 2 is already one of my favorite games of 2022. While I’d recommend playing the two games in order, if you only have time for one speedy 2D platformer this year, this is the one you want.

The Sonic-inspired platformer evolves beyond its Mega Drive inspiration.