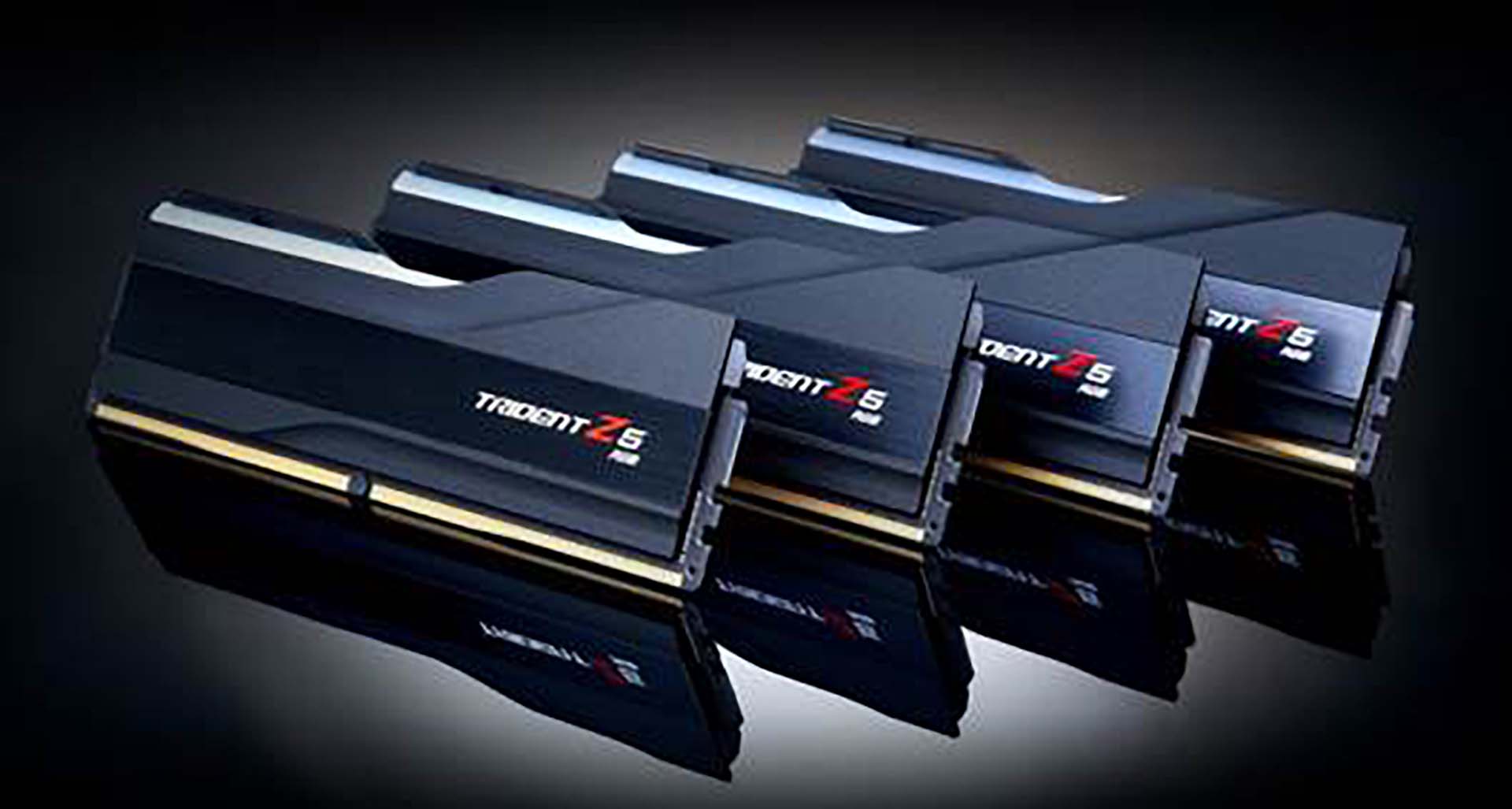 G.Skill has announced the release of the fastest DDR5 memory kit to date. At DDR5-6800 with a CAS latency of 32, the kit offers a tantalizing combination of high speed and low latency. G.Skill also announced a 2x32GB 6400MHz CL32 kit. This one really does raise the bar for high capacity DDR5.

The Trident Z5 RGB 32GB (2x16GB) kit is rated to run at DDR5-6800 CL32-45-45-108. The operating voltage and IC weren’t revealed, but given the timings, highly binned Hynix would be my guess, with a voltage of at least 1.4. However, we’re almost a year into the life of DDR5, and second-generation ICs are certain to appear at some point. Until we get the kit on our test bench, it’s just a guess.

The headline CAS latency of 32 at 6800MHz is impressive, though the Trcd, Trp and Tras are all 45 which is on the high side. Of course, if you’re going to spend the big bucks on a kit like this, you’re probably one who will try to lower those timings with some additional voltage.

The high-density kit is just as impressive, if not more so. This 2x32GB kit runs at 6400MHz with timings of 32-39-39-102. If you are interested in this kit, apart from needing some deep pockets, it’ll be important to pay attention to your motherboard qualified vendor list (QVL). This is the kind of kit that will certainly require BIOS support. I would expect users to encounter some issues while such a kit is still fresh to the market.

High density DDR5 kits at speeds beyond 4800MHz are rare, not because of the capabilities of the memory itself, but the limitations of the Intel 12th Gen memory controller. High density kits, particularly if you run four of them, are very difficult to run, and with a full set of dual rank modules, a 12th Gen CPU defaults to a rather pedestrian DDR5-3600. It will be interesting to see how high speed 64GB and 128GB configurations run on 13th Gen and Ryzen 7000 series processors.

DDR5 has already surpassed the 10,000MHz barrier in the hands of overclockers with liquid nitrogen. We’re hearing that some very impressive results are in the pipeline on next gen platforms. Expect DDR5 speeds to take a leap forward. It’s no coincidence that kits in the 6600MHz range are about to become a lot more prevalent.

But, outright speed isn’t everything. Latency matters for gamers. For Ryzen 7000 buyers, it’s looking like a good low latency 6000MHz EXPO kit will be optimal, as you’ll be able to run it with a 1:1 Infinity Fabric clock. There’s also G.Skill’s own Trident Z5 DDR5-5600 C28 kit to consider. The age old question: Latency or timings? That’s something we’ll definitely circle back to once the secrets—and quirks —of the next gen platforms are known.

We plan to review G.Skill’s latest and greatest memory with a next gen system (or both of them!). 6800MHz really sounds impressive, but will it deliver a meaningful performance increase? Stay tuned for that.

Both new memory kits will be available starting in October.

Not bad. Not bad at all.