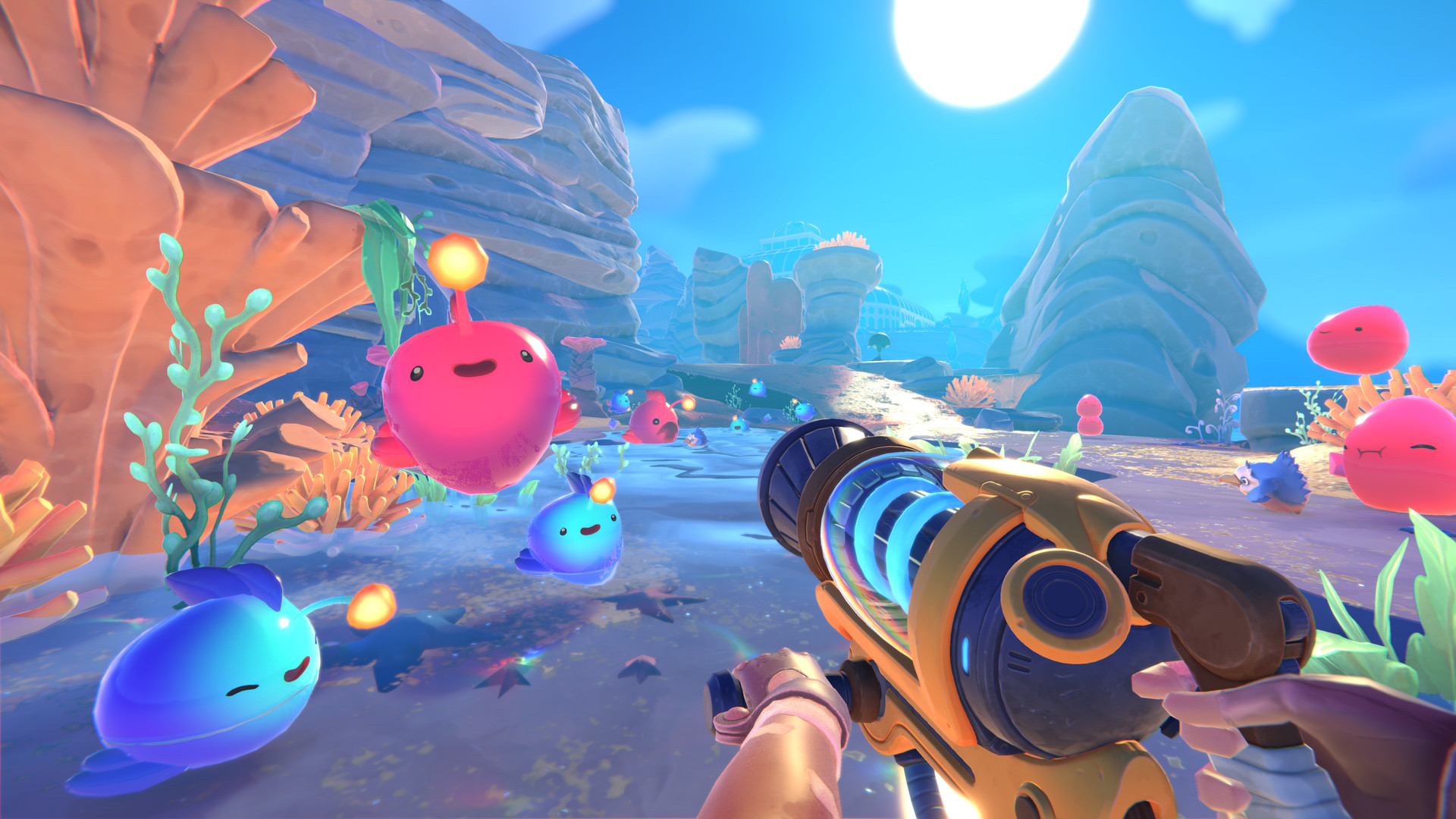 I’m running around at top speed vacuuming up cartoon apples so I can fire them into the mouth of a giant grinning blob with the feverish desperation of someone trying to take down an enemy APC with a grenade launcher.

Why? I have no idea. All I know is, there’s an enormous slime blocking the opening of a cave, and it likes eating fruit, and maybe if I feed it enough something will happen so I can enter the cave. Yeah, but why? I don’t know! I really don’t know. There’s a cave I can’t enter because the blob is in the way. There might be something cool in the cave. I will spend as long as it takes to find out.

Like Disney’s Dreamlight Valley, Slime Rancher 2 excels at compelling you to do things because you might get to do more things once you’ve done those other things. Armed with a vacuum gun, you begin in a base with just enough of a tutorial to let you know that sucking up slimes, expelling them into a holding pen, and feeding them their favorite snacks will result in them pooting out gems. Suck up the gems and fire them into the stock market to earn coins, or fling them into your fabricator to print out gear upgrades. That’s about all the game tells you. While Dreamlight Valley spells everything out for you with an infinite to-do list, Slime Rancher 2 mostly lets you figure things out for yourself after the first 90 seconds, which is kinda nice, actually.

Early on while sucking up slimes, carrots, and gems, I came across a weird little geyser spewing some kind of inky fluid that I couldn’t vacuum up. But looking at my fabricator’s menu, I saw an upgrade I could craft that would allow me to gather “science resources” from “nodes in the environment.” Inky geyser fluid feels sciencey and loosely qualifies as a node, so I figured that’s what I needed. Sure enough I was soon slurping up those geyers and other new resources I could use to build more upgrades.

Slime Rancher 2 knows just how to keep me motivated. While dashing around hoovering up carrots and chickens to feed my imprisoned slimes, I could spy barely visible objects on the top of distant cliffs or archways and immediately wanted to find a way up to collect them. With my base at the center of the map, most of the world is gated off in three directions, covered in the ‘fog of more’ (I simply can’t call it ‘fog of war’ in this cheerful place) making me anxious to unlock it and see what the rest of the map looks like. The spacious base makes me wonder what else I can build inside it, like gardens, silos, and ponds, with an underground annex promising still more room to build. I only have four slots on my vacuum gun, each capable of holding stacks of one item, so I already have an ongoing quest to add more slots and storage capacity. That’s all the reason I need to keep sucking up everything I find.

Even without the to-do list growing in my head, Slime Rancher 2 is a beautiful, colorful world to spend time in. Slimes are plump and adorable (though a bit gross when they leave a smear of goo on the ground or walls) and everything looks so darn fluffy. Even rocks and boulders look comfy enough to curl up on and take a nap. There be monsters, though: scary Tar blobs appear at night in droves, consuming everything in their path and happy to take a bite out of you (though they can be disabled in the menu if you want a completely gentle experience).

I only briefly played Monomi Park’s original Slime Rancher, so I can’t really make a comparison between the games, but Early access or not, Slime Rancher 2 feels polished and fun and wholesome, unless you think too long about putting cute blobs in jail and watching them go feral if you don’t feed them enough.

I do have a couple small complaints: the sprint meter feels completely unnecessary in a game like this (just let me run at top speed at all times, because what’s the harm?) I also wouldn’t mind an on-screen compass so I know which direction I’m facing without having to open my map. But despite those little objections, I can already feel my impending weekend being sucked into Slime Rancher 2 the same way I’m sucking slimes up into my vacuum.

There was something cool in the cave the giant slime was blocking, by the way. Several somethings, actually, but best of all a cute kitty slime that I promptly vacuumed up and who now lives at my base, an adorable new prisoner. See, all that time spent shooting fruit into a giant blob’s mouth was worth it. I knew it would be, even though I didn’t know why.

The bright and busy world of Monomi Park’s Early Access sequel makes it easy to lose track of time.