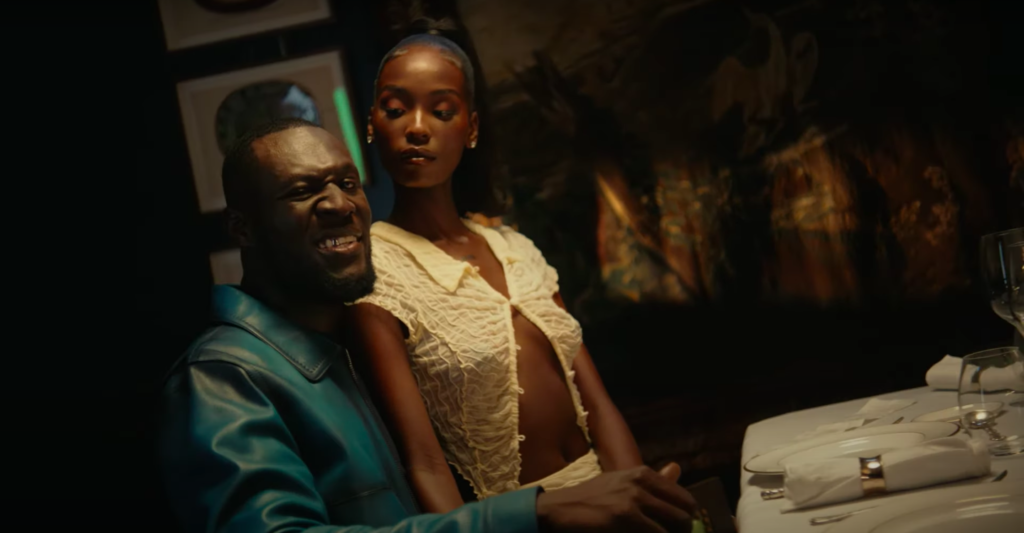 Stormzy’s new track, ‘Mel Made Me Do It,’ proves yet again that he is the G.O.A.T of the British rap scene, but some fans are confused about the meaning of the song’s title.

The 29-year-old British rapper, whose real name is Michael Ebenezer Kwadjo Omari Owuo Jr, has been ruling the hearts of fans ever since his “WickedSkengMan 4” days.

Over the past seven years, Stormzy has come a long way and given fans some of their favourite tracks like Own It, Shut Up and Big For Your Boots.

The rapper recently dropped Mel Made Me Do It, and the song’s music video features a lineup of famous personalities.

SEE: What is Get Rady With Music, Spotify’s new feature?

Screenshot from Mel Made Me Do It by Stormzy | YouTube

Meaning of the phrase ‘Mel Made Me Do It’

Fans are thoroughly enjoying the rousing lyrics of Mel Made Me Do It, but many are confused about the meaning of the phrase.

It’s not a commonly heard or known phrase across the world. Stormzy hasn’t decoded it for his unversed fans either.

However, Tobí Rachel, Joe.co.uk‘s Social Editor, has helped many confused fans understand what Mel Made Me Do It actually means.

Taking to her Twitter on Friday, September 23rd, the journalist clarified: “Basically, Mel is a Black British school teacher who taught a lot of us in the Noughties (2000-2009).

“She showed us how to avoid street life. Without her, we will all be in prison or addicts. Mel Made Me Do It is what we say when we become one of the good Blacks, like Stormzy.”

Basically, Mel is a Black British school teacher who taught a lot of us in the Noughties. She showed us how to avoid street life. Without her we will all be in prison or addicts. Mel Made Me Do It is what we say when we become one of the good blacks, like Stormzy pic.twitter.com/mgAF6sl4ii

Another Twitter user noted that Mel is “a force in the influencing community.”

Stormzy was born in 1993 to a Ghanaian mother. He has three siblings – a brother and two sisters.

Talking about his upbringing, the UK rapper said (per The Sun): “I grew up in Norbury, that was my stomping ground, in a house of five of us, my mum, my two big sisters, my little brother and I grew up and we didn’t have a lot of money at all. Very working-class background.”

“I used to take all my sister’s clothes. Lucky for me my big sister was a tomboy. So lucky for me I could go and take her clothes.

“My mum was working two to three jobs at a time. She was a cleaner, dinner lady, so we didn’t have much growing up at all.”

SEE: Keanu Reeves is not on TikTok but his deepfake has everyone confused

The music video of Stormzy’s latest song features a number of popular names – including Usain Bolt and Jose Mourinho.

Here’s a list of all the personalities who are seen in Mel Made Me Do It.

“Not even American artists go as hard as Stormzy did on his Mel Made Me Do It visuals. I haven’t seen a video this creatively talented since those Slim Shady videos,” one fan noted.

“You need to watch Mel Made Me Do It visuals by Stormzy at least 4 times. A lot of hidden messages. Just brilliant,” another fan wrote.

“I always knew Stormzy was that dude, been a fan since way way… but what he did on this Mel Made Me Do It joint?Why did he go so hard? Who made him angry?” tweeted another fan.

But “ Mel Made Me Do It” is a whole movie the visuals..top tier are you mad ?

I don’t think I’ve ever had the time to listen to a song that’s almost 11min long I think I’d get bored but listening to Mel made me do it by Stormzy, all I could think was this guy is amazing. It’s a song that will stand the test of time. I love it.

The visuals for MEL MADE ME DO IT are so creatively invigorating and inspiring. So lush so saucy. You know when you see something like…OK how can I metabolise this feeling and manifest it in my own sphere in my own way

The post Meaning of Mel Made Me Do It revealed as Stormzy’s new song blows fans away appeared first on HITC.